There is a wide range of beautiful hikes around Fontebona. The only but is that many old roads and paths have fallen into disuse. It took many hours of wandering about and retracing our steps to find a good number of paths that are still passable. After about three years of pleasantly roaming about we now have 12 routes worked out varying from 3 to 23 kilometres. For one euro we give you the detailed route description. We have a accompanying general map at the reception which you can study. 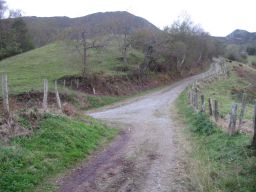 Specially designed for our donkey hike, you can of course follow this route without donkeys just as well. It avoids busy traffic, to build up confidence with the donkeys Pili and Lulu. You go up, by maybe not following the most logical route up, but by gradually gaining hight to get used to walking with the donkeys. The route leads you through a typical Asturian landscape with alternatively meadows and woodlands, a picturesque village (Lozana) and vistas, wooded banks and stone stables. 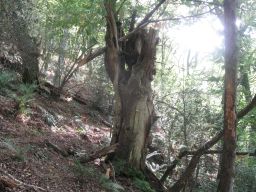 This short walk is not only a must for lovers of old woods and shade, but also very interesting if you like mushrooms. The scenery varies as you also walk along meadows and beautiful views, and shortly enter Samartín. Samartín is situated on an old castro, a settlement similar to the one of Asterix and Obelix. At the end of the walk you pass the stone quarry Peridiella. If you bring your dog on this route, do keep him or her on the lead from about la Venta. Dogs literally go for it on this part of the route because of the scent of game. 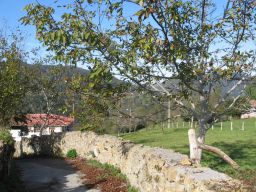 This short hike brings you via the valley of the river La Marea and through Candanedo to Beloncio, the ancient capital of the Celtic people called Lugones. In the beautiful village of Beloncio, also an important settlement for the Romans, is a bar where you can take a break. Though the cool washing place at the end of this village is very much worth while for taking a break. Fantastic if you, just like the anonymous supporter of this idyllic spot, love flowers and plants ánd gardening. 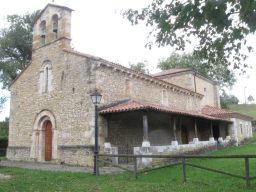 You want to go to Infiesto, and quickly please, but can it also be a pretty route por favor? Then this is the right route. You pass on the high side, via Lozana and the wide views, taking as many quiet country roads as possible to Infiesto. You do take a short detour to the Roman church in San Juan de Berbío. A nice excuse to take the somewhat quieter roads again. On your way back you follow the path along the river La Marea. 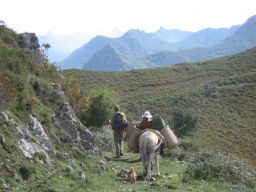 First over the Sellón ridge to the Ermita de San Lozenzo of which only a pile of stones remains. On your way you have splendid views on your left and right. This Ruta del Camín Real del Sellón (14 km) is also to be done with two cars from the Puerto del Arnicio (908m) to Fontebona. At the Ermita you go down to the village Omedal. And from here to Espinaredo, where you find the biggest assembly of graneries (hórreos) of Asturias. Through a climb to Lozana you get back on Fontebona. Despite a second half with rather many paved roads the route is worth while. 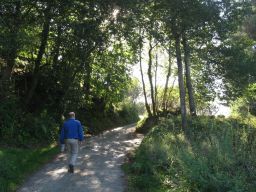 This is a short stroll above Fontebona. The route brings you higher than Fontebona quite quickly. From the highest point you walk back down hill at a relaxed pace. The stroll is a nice choice if you don´t want to walk too long, and yet want to get a good impression of the surrounding area. The walk goes both along meadows as through woods. The furthest point on this walk is Lozana, for a little cultural-historical information and some extra views. 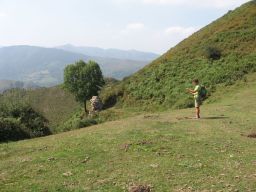 This daytrip brings you a few times up hill and down dale. You pass a mountain ridge with its beautiful views twice and pass the river La Marea with her own charm twice. On your way you find bars (Vegarrionda, Arenas de Beloncio, Vallín de Beloncio) to take a well deserved break. 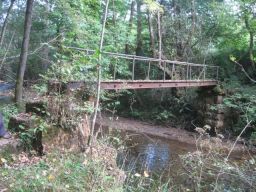 A short walk with many roundabout ways. Between times you can relax along or take a bath in the river La Marea. The first bit until reaching the main road requires your intuition, because there are only tracks of game to follow. Great if you want to feel like exploring the surrounding of Fontebona at a modest scale instead of literally following the beaten track. While preparing for this small walk, do take into account a badly to the modern times adjusted environment in the form of jungle vegetation and jungle mud. 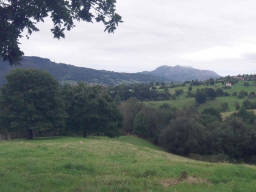 This route is a nice way to get to know the cultivated land nearby Fontebona, whereas you will pass rougher bits as well. Along the upper side on your way to Lozana you have beautiful views. After that you follow a winding trail through the woods high above the river Espinaredo. Via the villages Santianes and the parish church in San Juan de Berbío you walk to Esteli. You follow a rolling country track back to Lozana. From Lozana our upper access road leads you to Fontebona again. 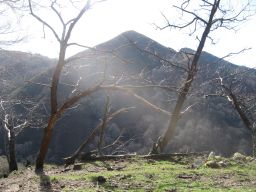 This hike is, like route 11, a serious daytrip. Routes 10 and 11 are characterized by very pretty vistas and follow quite long stretches along rivers. Both routes are on the east of Fontebona, but have a different valley as furthest part of the route. Route 10 is, compared to route 11, somewhat rougher. 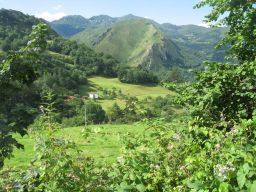 This hike is, like route 10, a serious daytrip. Routes 10 and 11 are characterized by very pretty vistas and follow quite long stretches along rivers. Both routes are on the east of Fontebona, but have a different valley as furthest part of the route. Route 11 is, compared to route 10, somewhat easier. 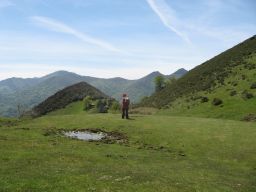 A stiff hike. Because you are an experienced hiker. Because you like to climb that intriguing point southeast of Fontebona. Because you like panoramic views. And because you don´t mind sweating it out. You will like it, we think. We at least were very much surprised by the vistas from the Pico Múa: south the mountain range Cordillera Cantábrica and the Picos de Europa in the east. You can cut off a part of the route by beginning in Arenas de Beloncio or Cuerrias.